Does the color of a rum mean anything? 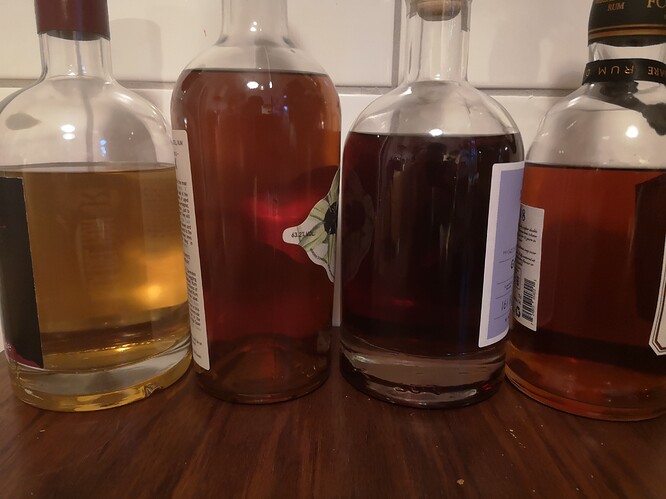 I recently bought a bottle which once again brought me to the question about color in rum.
In the picture, you see the usual shades of aged rum. The light, white wine color of the continentally aged Long Pond, the mahogany of the tropically aged Foursquare, and the dark brown of the caramel-colored Diamond.

The color of the Sample X Clarendon 14 is similar to the tropically aged Foursquare - but Erik Molenaar of Kintra (who bottled this rum) told me, that it has aged mostly in continental climate after a few years in the tropics. It rested in a first-fill bourbon barrel. There is cask sediment in the bottle.

How did the color get into this rum?
Of course, there are many other shades of rums with a red wine finish or due to heavily charred barrels. But none of this seems to be the case.

What does the color of a rum tell you about the rum? Does it tell anything at all? Is my hypothesis of associating darker shades with tropical aging too weak to prove?

Well, since food colorant (to generalize) can produce pretty much any color for food and drinks the color doesn’t really tell anything. If you wanted to you could have unaged, black rum, although this would probably kill the profile.
I believe that for “marketing” reasons some bottlers like their aged rums to look dark, dark and even darker and I even know rum fans who strongly believe that more ageing also leads to darker rum. While this is true to some extent I think no “regular” ageing process will lead to rum as black as the Diamond shown here. It’s no negative for me here though since I personally like the dark look of a rum. Of course I wouldn’t accept a negative influence on taste just because of coloring, but that S.B.S Guyana release definitely proves that coloring doesn’t automatically lead to destruction of a flavor profile, since all 4 in the release are extraordinary good rums.

Another well known example for “selected coloring” is Ferrand. When you check their Plantation homepage they add E150a to many rums to make all bottles look the same, which you can probably call a valid marketing induced purpose. E.g. the Xaymaca Special Dry (perfect beginner Jamaica rum) contains 0 to 0.1% E150a, so you can be “lucky” and get a bottle without cane sugar caramel or the bottle can contain 0.1% and you probably won’t taste a difference anyway. The explanation for the usage of E150a is: “Solely to adjust – if needed – the color between different batches. Color may initially vary according to the type, the age and the size of the ageing casks”

You’re absolutely right. Yet, artificial coloring is not what I’m aiming at.

The first title of my posting was about natural color, but then I thought about the typical coloring at Diamond and I changed it.

Still the demerara style of coloring is different to the caramel /E150 coloring used in most standard bottling.

The usual single cask bottlings are uncolored, so is this clarendon, but still it is much darker than any continentally aged jamaican rum I have.
So more specific as color may be added artificially, what does natural color mean? Does it show us anything relevant about the rum?