Getting priced out of my rums or am I going to end up a bottle flipper?

What do you do when you feel an unopened bottle has become so expensive that you’re literally priced out of your own stuff? When you hold it in your hand and can’t not think of how you’re unable to afford it? Not because the original sale price but the current going one? I guess anyone with an unopened bottle of Velier Demeraras or Caronis can easily relate to this question. Are we destined to become bottle flippers (sometimes they like to bill themselves like “long term investors in rum” hahaha)?

Me, personally, I have no clue how to handle not being able to open a bottle but at the same time not wanting to sell it either…

Let if fall on the floor and drink the puddle with a straw?

I think everyone should decide for themself what to do with this conundrum.

If you buy a bottle with the purpose of opening and drinking it, should it matter that it rises in value? If it does matter: sell it and buy some other bottles with the money. If it doesn’t matter: open it and enjoy it. Preferably share it with some friends if you get the chance. To me, it always feels better if I can share an outstanding drop with people. I somehow feel “less guilty” for opening it if it has become more valuable at that point (if that makes sense)

Rum is rum and money is money. At some point maybe one or the other is more important in your life. The bottle is yours to decide what you want with it.

I thouhgt about it, mainly for whiskies I’ve got, and they are much higher than rums : the best solution is to split them at a “decent” price. You keep 20-25cl and you sell the remaining : usually you may pay back the purchase price, you can taste it several times with some friends and you share with people who can’t buy the complete bottle. The only thing to think is the “decent” price.

My very personal answer is my personal story of this year:
I could manage it to get a Valinch & Mallet REV 1994 ((1. Spirit of Art, RX9175) on ebay for 199 EUR - less than the release price.
I opened it after one day thinking about it and shared it with my best rum buddies for the price I paid.
No regret. Only joy.

should it matter that it rises in value

Well the problem here is I can’t afford it if I want to be honest with myself, but at the same time I don’t want to start flipping them because I don’t want to become a leech. The question why I can afford to not sell them but not afford to open them is at the heart of this conundrum: because as long as it’s unopened it is worth what it is worth. I guess I’ll have to work through it eventually. (and I appreciated your puddle with a straw comment a lot more than a simple like can convey)

Would it be different if it was a painting in stead of a bottle of rum?

I can’t afford it if I want to be honest with myself,

If you would be totally honest, you’ve already afforded it simply because you have it. The thing that makes it hard is that you don’t see it anymore as “just a bottle of rum”, but as a commodity.

The leech thing as you put it, is the way you see bottle flippers, so that’s why I asked if it were different if it was a painting. Because you have a certain feeling about your bottle(s) and bottle flippers, but possibly not about a painting, which can also be a commodity.

The reason you can afford not to sell them is probably because you have a form of income. You think you can’t afford to open them because, like I said before, it has maybe become a commodity and no longer a bottle of rum due of the worth that our economic system has placed on your bottle(s).

If you would be in a situation in which you would NEED to sell the bottle, the problem would no longer be a conundrum because the solution would have presented itself.

Thanks by the way for appreciating the “puddle with a straw” quote, because that was me just having a piss with it

Maybe you need to work through it, maybe not. As I see it: as long as you have the bottle and it’s closed, there isn’t really a problem to begin with. 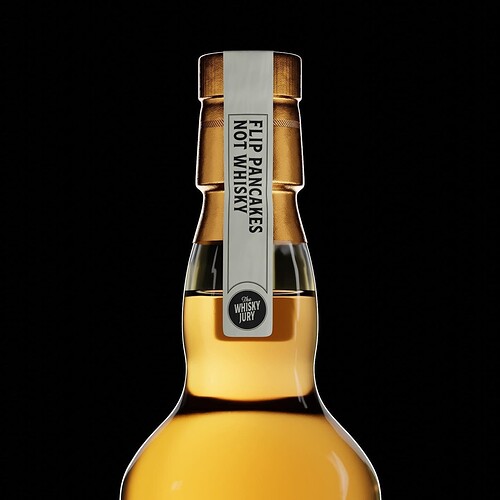