I had 3 plantation rums to date
but I found them very sweet …
are all plantations rum sweet …I look at them all the time …but I get put off trying a new one due to my past experience… but the rums are highly regarded in the community.so I am just wondering is there a plantation rum out there.that isn’t sweet

the rums are highly regarded in the community

Well… no, not really. At least not among rum nerds. Mainly for three reasons:

There are exceptions though. They do have some rum without added sugar (nowadays luckily declared on the label).
The Extreme Series can be quite good. The standard 3 Star and OFTD are fine for what they are and some special editions are highly regarded even among nerds (Hampden HJF, Saint Lucia for the Nectar, the <>H for the addicts).

But overall I wouldn’t call Plantation a top tier bottler.

Edit: they are quite popular, though and I don’t want do reduce the community to the rum nerds. So maybe I need to differentiate: popular: yes. highly regarded: hm, depends on who you ask.

Plantation is famous for calling sugaring the rums “Dosage” - as it is called in Cognac.

In the past nearly all of the Plantation Release have be dosed besides the Extreme Series.

In the recent years they changed their practice. They seem not to dose any of the jamaican expressions anymore. Especially the Guyana and other Spanish style rums are still heavily sweetend.

Which rums did you have?
The most famous is probably the The Barbados XO 20th Anniversary. This one is highly dosed. with 20g/l (which is the maximum allowed amount to be called a rum in the EU).

Plantation usually is very transparent with what they put into their rums.
On their homepage you find a lot information about them
e.g. for the 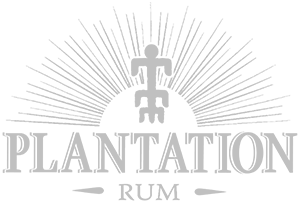 The only expressions I regularly find interesting (besides the extreme) are the One Time Limited Editions. Those are good value for money but no high class rums.

DevidedByZero is right. I actually like the OFTD a lot - my preferred mixer. The Standard Bar range is good for making drinks

Well… no, not really. At least not among rum nerds.

while in general, I agree, it is also fair to mention that there are some that I quite like, for instance the one-time limited TDL 2009, which has dosage 0. And of course the Extreme series, or the phenomenal 2002 HD HJF.

ok thanks a lot I had stiggings fancy but I know that was more off a mixer and I had the Guatemala gran anjeo which I still got the bottle has its too sweet for me even as a mixer
and oftd again I know that was a mixer .
I will stay away from plantations unless I see a extreme one

Plantation has bottlings which have great value for money. The OFTD or 3 Stars are for mixing, and the One Time Limited (and some of the Single Casks as well) are good for introduction into higher-proof rum. Especially the Trinidad 2009, but the Barbados and Jamaica Expressions are nice as well. For the Single Casks, the recent Fiji 2001 is pretty nice. the Iron Root Clarendon (Jamaica) is good as well.

As soon as you move into the limited rums a budget of 40€/GBP isn’t enough for a good bottle - they start with 60 and head to hundreds of €s. The extreme series is extremely expensive as well. Don’t spend so much money on a rum if you don’t have the experience what to expect - the cheapest is the 2007 Barbados WIRD for >180€ and that’s not a bargain! A lot of the other extreme releases start at 300-500€ - something I haven’t paid for a rum.

These are the rums I named:

The “Plantation Jamaica (Ironroot Cask Finish)” was produced in Jamaica at the Clarendon distillery. It was selected and bottled by the independent bottler Maison Ferrand. It was distilled in 2007 from Molasses and then aged for 14 years. The rum is... 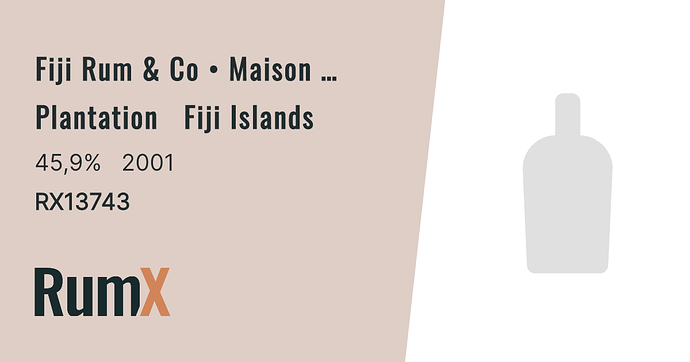 The “Plantation Fiji Islands” was produced in Fiji at the Fiji Rum & Co distillery. It was selected and bottled by the independent bottler Maison Ferrand. It was distilled in 2001 with a Pot Still. The rum has an ABV of 45,8%. 8 community members... 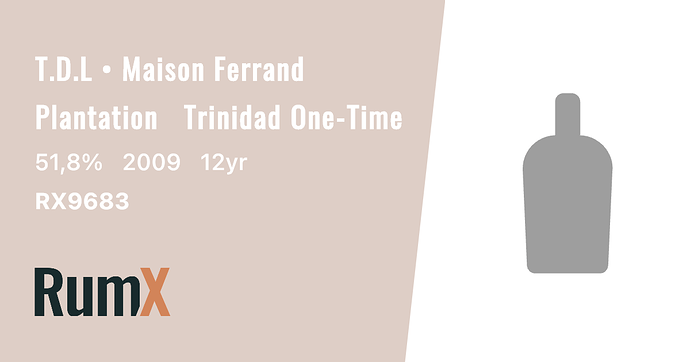 Plantation Trinidad One-Time is a 12 year old rum distilled in 2009 from molasses with a column still. It has an ABV of 51.8%. It has generally received positive reviews, with users noting its good price-performance ratio and pleasant nose of fresh... 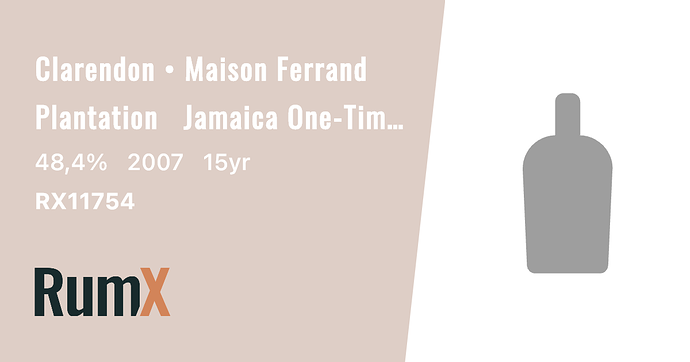 Plantation Jamaica One-Time MSP is a 15 year old Jamaican rum produced at the Clarendon distillery. It has an ABV of 48.4% and is generally well-received, with reviewers noting its subtleties and pleasant drinking strength. It has a nose of exotic... 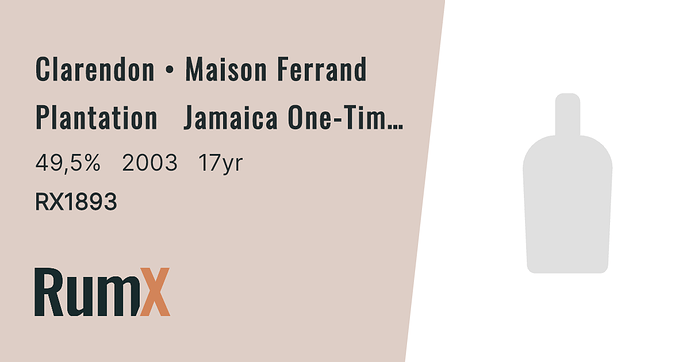 The Plantation Jamaica One-Time MMW is a Jamaican rum produced at the Clarendon distillery and bottled by Maison Ferrand. It was distilled in 2003 from Molasses with a Pot Still and aged for 17 years. The rum has an ABV of 49,5% and is rated highly... 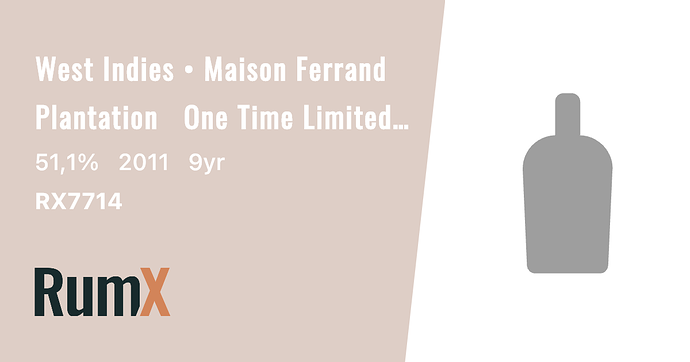 The Plantation One Time Limited Edition is a 9-year-old Barbados rum produced by Maison Ferrand. It has an ABV of 51.1% and is generally well-received, with users noting its sweet and spicy aromas, nutty and oaky flavors, natural sweetness, and good...

The Plantation Barbados 2013 One-Time Limited 20 is a 9 year old rum from Barbados, bottled by Maison Ferrand. It has an ABV of 50.2% and is generally well-liked, with notes of coconut, caramel, spices, chocolate and dried fruits. It is sweet on the... 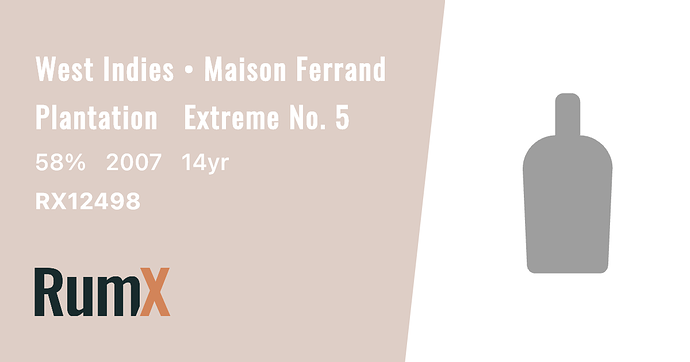 The Plantation Extreme No. 5 is a 14-year-old rum from Barbados, produced at the West Indies distillery and bottled by Maison Ferrand. It has an ABV of 58% and is limited to 2856 bottles. Reviews describe it as having a relatively flat character with...

True, I forgot about the One-Time-Limited series.

I second that motion. As mentioned, Plantation isn’t bad, per se. Just as a rum nerd, most of it is not really exciting.

If you’re looking for a decent rum in the 40-60GBP range, I’d say Plantation isn’t the worst place to look, even if the price level for the single cask series has mostly crept above that range.

If you don’t like sweet rum, try to find out the “dosage” level of your potential Plantation rum. Anything in the lower single digit range should not be noticable, zero beeing the optimum (but I wouldn’t go so far as to say “has to be 0g/l”).

Bottle splits are a nice way to try some of them without investing in a whole bottle, but almost impossible/not worth it when you’re in the UK – thanks, Bexit.

ok thanks for the advice much appreciated

the recent Fiji 2001 is pretty nice

Agreed, @les I could offer you a sample of that rum if interested.

I agree with Lukas and Divided.
In fact Plantation does a bit of everything: rums to mix, easy and sweet rums for beginners, more demanding rums that can please amateurs for quite correct prices (the one time series, the single cask) and rums for experts (or richer amateurs).
I prefer to see the good side of this brand: the transparency on the product and the fact that there is little speculation so the prices remain really quite good overall (even if one can regret some recent changes, like the 2001 TDL antipodes - but I think LMDW is more responsible for that).
Dosage is a common practice in the world of spirits or certain wines (in Champagne).
(@lukasdrinkinghabits : Dosage is the technical term in France for this, not a word of the plantation brand). For example in cognac, it is allowed to color with caramel and to add sugar (2% maximum I think) but without the consumer knowing it. In Champagne there always have been dosage (the mention Brut/Extra Brut/Demi-sec depends of the sugar contained). Today, dosages are more and more specified on the labels, but this was almost never the case before.

Personally I prefer without sugar added 99% of the time, but the addition of sugar does not always make a bad rum either. You also have to taste and make your own idea. The Plantation XO 20th anniversary is clearly too sweet for me. The last panama single cask and the last TDL 2009 really pleased me and when I learned that they were sweet (very little) I was really surprised.

In short: plantation does everything… good and not so good

(@lukasdrinkinghabits : Dosage is the technical term in France for this, not a word of the plantation brand)

For the Rest of the your posting I agree a 100%

It is quite easy: A lot of us offer samples here
You can browse the sample list of each user and get in contact with him/her by personal message. After payment you’ll receive a box with the requested samples, thats it.

I see what you mean by the extreme plantations
very expensive