With the newest FRC Release of a 2002 TDL, the hype on those heavy TDLs is bigger than ever - it was sold out faster than the Hampden.

In this thread, I want to discuss what makes those rums special and why this specific type seems to be limited to the vintages 2000, 2001, 2002, and 2003.
There are minty 2009s as well, but they are much lighter. The Rums before 2000 seem to be lighter as well.
And in 2003 there are bottlings which are completely different: The Our Rum & Spirit 2003 (February 2003) TDL was 100% light style without any mint and those dirty flavors that created the hype.

When the RA 2001 was released, there were immediate speculations about being an undisclosed Caroni or a Caroni blend. (see Barrel Aged Thoughts: RA Trinidad Rum 19 YO T.D.L. 2001 or T.D.roni – Single Cask Rum)
Perhaps @StefanoCaroni has found out anything about these vintages in his research in recent years since he was involved in starting the first hype about the hidden Caronis ;).

On Reddit I read another interesting theory I wanted to share and which made me start this thread:

Overall: Some experimentation briefly took place with a Vendome pot still in the early 2000s at Angostura and that still was sold to St Lucia Distillers in 2003. While a very short window, my guess would be that this was distilled on that Vendome still before it was shipped off. Either that or there was Caroni blended into this rum before it was casked, which is possible too, but the former is way more likely.
https://www.reddit.com/r/rum/comments/nt78hp/review_rum_review_6_single_cask_nation_angostura/

I like this theory, especially as the Vendome Still which went to St Lucia isn’t a pure Pot Still but a hybrid still with a pot and column rectifier - which makes labeling those rums as column still not something completely wrong. Compared to the St Lucia Vendomes the TDLs are much lighter (although there is this Elements Eight Vendome Rum, which is super light and is supposed to be distilled on the Vendome Still in St Lucia as well)

Matt Pietrek writes, that the Vendome Still at St Lucia was set up until February 2003. The last known batch of the Heavy TDL is from April 2003 (see CDI 2003 Labels) 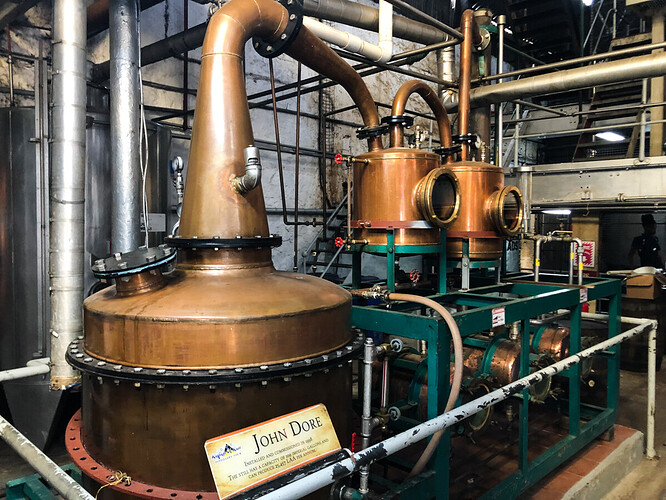 An in-depth look at Saint Lucia Distillers and the many rums they make.

What do you believe makes those rums special? Why has TDL stopped producing rum like that? Are there other vintages beyond those four from the early 2000s which share this heavy TDL profile?

This is a very interesting topic, thanks for bringing it on the table!
I remember that Dominik Marwede at the 2021 Berlin Rumfest emphasised that the RA TDL 2021 very likely consists of a Caroni component (blend). But that might have been just marketing talk.

My personal impression is that the “Caroni blend” story is not completely out of scope.

Hopefully @StefanoCaroni can shade some light on that topic.

What makes me doubt the Caroni Blend story is, that is economically a bad decision to sell an undisclosed blend of rum that can be sold as a single cask rum at horrendous prices. Why would I blend a Caroni and don’t tell?

Yes, but we don’t know anything about that fictive Caroni barrels. Part of the deal could be an NDA… who knows My seller presented me the new plantation Trinidad 2009 like this : containing caroni (there would have been this discussion with the guys at plantation). I didn’t try it for now.

I personally don’t care about it (caroni inside or not) because I’m not a fan of caroni at all, I offered the split because my salesman told me it was pretty good and I trust him

Thanks! That’s very interessing. A short to long, don’t watch:

Dirk and Steffen talk about how Caroni made blends with Jamaica Rum (from National Rums of Jamaica) to make their own brands more palatable. This was mainly bought by their own employees. After Caroni went out of business, there were no more buyers for this type of rum, but there were >3000 barrels left. These barrels were sold to Angostura.

When the RA 2001 came out and Steffen started the hype, he also went to Luca Gargano with a sample. The laboratory values spoke for a very strong rum (>1500 congeners). Luca Gargano thought Monymusk aromas to perceive and also Steffen gets later with the Velier 1995 EMB the association.
The 2000 - 2003 vintage was Caroni with Monymusk, from 2004 to 2005 this blend was made with Angostura Rum.
Ergo: the 2001 TDL is supposed to be a Monymusk/Caroni blend. Other people Steffen talked about this story, like Roger Caroni, agree with this theory.

My opinion: Jamaica would not be the first thing that came to mind for the heavy TDLs, but the mint profile is already a real signature style of Monymusk/Clarendon - that can already fit.

On the other hand. Steffen talks about the mint being gone with the 2003 vintage, but it isn’t they still have minty vintages like the 2009 but it isn’t as heavy and dirty as the earlier vintages.