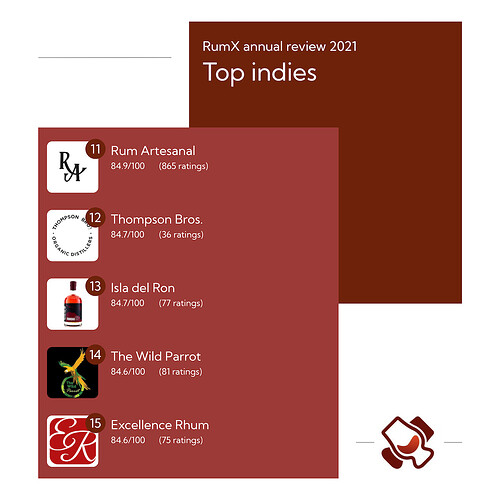 If you expected the big names to take the top position then 2021 proved you wrong - instead we see some “freshmen” taking the highest ranks. Our top 3 bottlers in 2021 The Whisky Jury, Nobilis and Distilia released some highly sought after bottles that helped them gain popularity among the rum lovers quickly thanks to the consistent quality of their rums. Competition is fierce though if you look at the average ratings of our top 15: The top spot is only 3 rating points ahead of the 15th rank - a testimony to the outstanding quality the rum market has to offer these days. Congratulations to all bottlers listed for these outstanding results!

Which independent bottler is your personal number 1

I also would go for RA, followed by Velier. But the question ist availability as well, as RA is quite unavailable outside Germany or especially EU, while others are quite unavailable the other way around. So I cannot vote for an IB, if I had no reasonable chance getting to it.

But where is Rom De Luxe ?

…and few bottlings. In that regard, bottlers who release a wide veriety (like RA) are disadvantaged over those who only release few but high quality bottles – like TWJ. In that sense, it would be fair to restrict the ranking to the top 5 of each bottler. Because variety is a quality in itself, but misrepresented in this ranking.

Besides the statistical quirks that put Distila above RA I mostly agree with the ranking, even if I personally would weigh the price/quality ratio higher, when thinking about bottlers (I try to ignore it when rating an individual rum).

Hmmm, while it’s really an interesting result I find the hugely different sample sizes irritating and as pointed out RA makes stuff like the Carribean Blend for like 20 bucks and you can’t compare that to anything from Nobilis or Velier e.g. since they simply don’t produce any such rums (at least not to my knowledge).

While I wouldn’t necessarily call RumClub Private Selection my overall favorite bottler (well if they continue like this they are) since I had great stuff from RA, Velier, Nobilis and others on the list it’s unbelievable they’re not on the list at all. Well good for me

since you can still buy some awesome rums like the 1992 HLCF.

but based on the result you could also call Velier the favorite bottler since it was simply drunk and rated the most and many of the people who rated Velier in this comparison statistically never had a rum from the other bottlers to compare it.

That’s right, I agree with you. The requirement to be included in the list was at least 25 tastings by the RumX community in the period between 01/01/2021 and 12/31/2021. There is no additional weighting by number of ratings. Thus, it is a simplified representation and more complex aspects such as the number of releases and the depth of the product range are not taken into account. The list is deliberately not intended to express “the truth”, but to give an overview of the RumX community’s tastings and to encourage exciting discussion.

What I can imagine as an optimization for next year is, for example, that only the top bottles of a bottler are considered. In this way, bottlers with a very wide range, such as Rum Artesanal or Spirit of Rum - are not “penalized” by their diversity.
In addition, with the growing community, the minimum number of ratings can be set higher and higher.

Thanks for that inspiring overview, it provides cool insights (and also a nice basis for discussion

). Looks like I need to check out “Chantal Comte”, so far very much under my radar.

Can we have the “Top 10 Official Bottlers” as well?