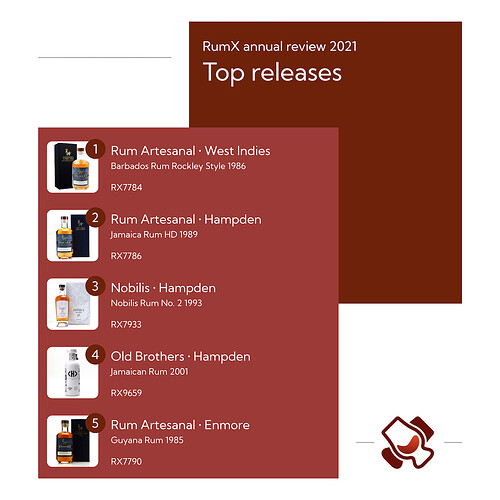 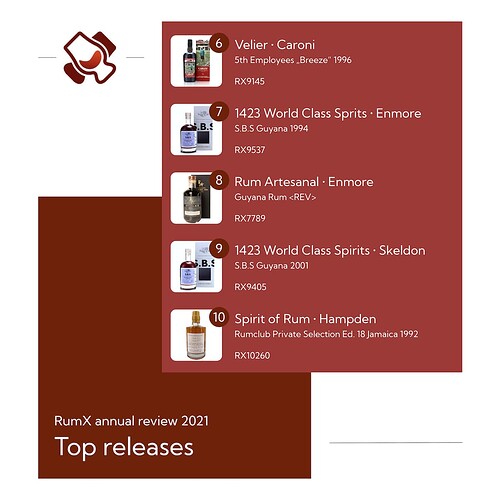 Rum Artesanal’s unparalleled rise in 2020 and 2021 could hardly go unnoticed. An entire series of outstanding releases catapulted the bottler from Northern Germany into hearts, minds and glasses of the rum community - and last not least into our rums of the year list: 4 out of the 10 top rated rums by our RumX community in 2021 come from Rum Artesanal. Wow!

The top runner was Rum Artesanal’s 2021 release of an 1986 Rockley which was often stated to be one of if not the best Rockley bottling ever. The average rating by our RumX community of 93,17 points puts this bottle among the highest rated bottles of all time - making it a true milestone and benchmark rum. Also the second place goes to Rum Artesanal for another rum bottling from the 80s: The Hampden 1989 received an average rating of 92,71 points and thus scored only slightly lower than the Rockley.
The third rank is taken by another release from this distillery - Nobilis, our silver medal winner in the bottler of the year 2021 list, pulled a real coup with their 1993 Hampden and scored 92,25 points from the RumX community.
But also the remaining slots are taken by absolutely remarkable rums - up to slot 6, the average RumX rating is still above 90 points. Kudos to all bottlers behind these marvelous releases!

In a way, this is the more representative “best indie bottler” ranking